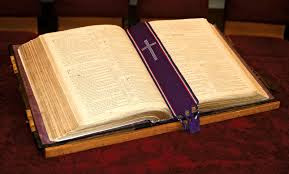 The Old Testament is the first section of the Bible, covering the creation of Earth through Noah and the flood, Moses and more, finishing with the Jews being expelled to Babylon.
The Bible’s Old Testament is very similar to the Hebrew Bible, which has origins in the ancient religion of Judaism. The exact beginnings of the Jewish religion are unknown, but the first known mention of Israel is an Egyptian inscription from the 13th century B.C.
The earliest known mention of the Jewish god Yahweh is in an inscription relating to the King of Moab in the 9th century B.C. It is speculated that Yahweh was possibly adapted from the mountain god Yhw in ancient Seir or Edom.

The New Testament tells the story of the life of Jesus and the early days of Christianity, most notably Paul’s efforts to spread Jesus’ teaching. It collects 27 books, all originally written in Greek.
The sections of the New Testament concerning Jesus are called the Gospels and were written about 40 years after the earliest written Christian materials, the letters of Paul, known as the Epistles.
Paul’s letters were distributed by churches sometime around 50 A.D., possibly just before Paul’s death. Scribes copied the letters and kept them in circulation. As circulation continued, the letters were collected into books.
Some in the church, inspired by Paul, began to write and circulate their own letters, and so historians believe that some books of the New Testament attributed to Paul were in fact written by disciples and imitators.
As Paul’s words were circulated, an oral tradition began in churches telling stories about Jesus, including teachings and accounts of post-resurrection appearances. Sections of the New Testament attributed to Paul talk about Jesus with a firsthand feeling, but Paul never knew Jesus except in visions he had, and the Gospels were not yet written at the time of Paul’s letters.

The King James Bible is possibly the most widely-known edition of the Bible, though in England it is known as the “Authorized Version.”
First printed in 1611, this edition of the Bible was commissioned in 1604 by King James I after feeling political pressure from Puritans and Calvinists demanding church reform and calling for a complete restructuring of church hierarchy.
In response, James called for a conference at Hampton Court Palace, during which it was suggested to him that there should be a new translation of the Bible since versions commissioned by earlier monarchs were felt to be corrupt.
King James eventually agreed and decreed the new translation should speak in contemporary language, using common, recognizable terms. James’ purpose was to unite the warring religious factions through a uniform holy text.
This version of the Bible was not altered for 250 years and is credited as one of the biggest influences on the English language, alongside the works of Shakespeare. The King James Bible introduced a multitude of words and phrases now common in the English language, including “eye for an eye,” “bottomless pit,” “two-edged sword,” “God forbid,” “scapegoat” and “turned the world upside down,” among many others

The Bible takes its name from the Latin Biblia (book or books) which comes from the Greek Ta Biblia (the books) traced to the Phoenician port city of Gebal, known as Byblos to the Greeks. Writing and books became associated with Byblos because it was an exporter of papyrus used in writing)and the Greek name for papyrus was bublos, linking the city with the written word. Although the Bible is often considered a single, cohesive, work, it is actually an anthology of ancient writings by many different authors over many centuries which were collected in a single book. The Bible contains works of poetry, religious-themed narratives, philosophical musings such as The Book of Ecclesiastes, epistles, and the apocalyptic masterpiece known as The Book of Revelation.
The common thread all these collected works have in common is the existence of an all-powerful deity who is the creator of the universe and has an interest in the personal lives and final fate of human beings. The books of the Christian Bible were arranged in the sequence one finds them in today to tell the story of the creation of the world by a supreme deity, the fall of man from paradise, and humanity's redemption by the Son of God but these books were not written in that sequence nor would the original authors of the Old Testament works have had that particular story in mind. The Bible of Judaism (collected and authorized by c. 3rd century BCE) contains the Torah (the first five books of the Bible) and the Tanakh (the stories of the judges and prophets) and makes no mention of Jesus Christ. The God of the Bible in these works is the God of Judaism - a single all-powerful deity - and, prior to the approptiation of Hebrew scriptures by early Christianity, the stories which made up the Bible told the story of God's care for and intervention in the affairs of the Israelites of the Middle East.


Structure of the Bible


In Judaism the scriptures are called the Tanakh and are recognized as comprising twenty-four books divided into three categories: The Pentateuch (or Teachings of the Five Books of Moses) The Prophets, and The Writings. Christianity, which appropriated the Tanakh and claimed it as their own early theological history, call it the Old Testament. Early Christian writers, years after the probable date of the death of Jesus, penned the gospels and The Book of Acts. Paul the Apostle wrote most of the epistles which make up the twenty-seven books of the Christian New Testament and whose theology informs the gospels. The Book of Revelation, attributed to John of Patmos, is the last book of the Christian Bible It is difficult to accurately date the composition of the books which make up the Bible but scholars generally agree that the Pentateuch dates to the 10th and 6th centuries BCE and that the Tanakh was fixed as scripture well before the 1st century CE. The books of the Christian New Testament were composed between 60-110 CE (the Gospels) 45-130 CE (the Epistles) and 68-100 (The Book of the Revelation of St. John). Many people of the ancient world, and even today, believe the Bible to have been written by God. It is held to be the best-selling book in history and has influenced religious thought world-wide for centuries. https://www.ancient.eu/bible/