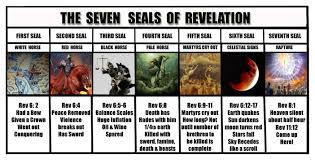 These seals make an appearance in Revelation 6:1-17 and Revelation 8:1-5. When John sees a scroll in heaven, which no being except for “the Lion of the tribe of Judah, the Root of David” can open (Revelation 5:4-5), John watches as God breaks open the seals one by one to unfurl the scroll.
The First Seal (Revelation 6:2)

This first seal introduces the antichrist onto the scene as a rider of a white horse. This rider wears a crown and will deceive many with talks of peace, but he will wage war against the saints.

Despite the promises of peace from the antichrist, warfare will break out after this seal breaks. A red rider on a horse slays a great number of people.

A rider on a black horse will spread famine throughout the earth. With whatever population is left on the earth from after the warfare, they will have to survive by bare means of food.

Death, riding upon a pale horse, wipes out one-fourth of the earth. Many had attributed the events of the second through fourth seals to the great wars, famines, and bubonic plague which wiped out good portions of Europe in the 14th century.
The Fifth Seal (Revelation 6:9)

Those martyred will ask God how long until He judges the earth. They are told a little while longer and given a white robe.

Silence fills heaven. Reminiscent of the Sabbath day of rest God took on the seventh day after creation, a brief pause occurs before the following judgements.
The First Trumpet (Revelation 8:7)

Hail, fire, and blood will rain down on the earth and wipe out one-third of all plant life.

A burning mountain falls into the sea, turns one-third of the ocean to blood, and one-third of all sea life dies.

A star called wormwood poisons one-third of all the freshwater supply.

One-third of the moon, stars, and sun darkens.

Demon locusts with human faces, long hair, lion’s teeth, and the power of a scorpion sting plague and sting nonbelievers for five months. Those who are stung will wish for death.
The Sixth Trumpet (Revelation 9:12-18)

Four fallen angels are released and wipe out people from sulfur and fire pouring out of their mouths. They manage to wipe out one-third of mankind.

Another break from the plagues, and onto the seven bowls of judgment, 24 elders in heaven declare it’s time to destroy those who destroy the earth. The temple in heaven opens, featuring the Ark of the Covenant.