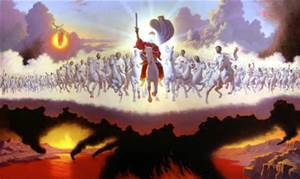 The Meaning of the Seven Last Plagues

People have already made their choice either for God or for Babylon. Before Christ comes, however, the destructive winds of Satan’s fury that have been restrained (Rev. 7:1-3) are unleashed, followed by the seven last plagues.

Read Revelation 15:1 along with Exodus 7-11. How are the Egyptian plagues, considered the backdrop for the seven last plagues, instructive regarding their purpose and meaning?
The seven last plagues are referred to as the “last” plagues because they come at the very end of earth’s history. In contrast, the plagues of the seven trumpets cover the time period that includes the entire Christian age and are restricted in their scope. They are executed while the gospel still is being preached (Rev. 10:8-11:14) and intercession is taking place (Rev. 8:2-5). They are mixed with mercy, and their purpose is to bring the enemies of God’s people to repentance.
On the other hand, the seven last plagues are poured out just prior to the Second Coming. They are poured out upon those who, like Pharaoh, hardened their hearts against God’s redeeming love and would not repent (Rev. 16:11). Divine wrath is God’s righteous judgment on the choices people have made (Rom. 1:26-28), and at that time the lost are reaping the consequences of their own choices.

Read Revelation 15:5-8 along with Exodus 40:34-35 and 1 Kings 8:10-11. What does the statement that “no man was able to enter the temple” (Rev. 15:8) suggest about the timing of the seven last plagues?
The expression “no one was able to enter into the temple” (Rev. 15:8, NKJV) points to the close of probation (Rev. 22:11). As Christ’s mediatorial ministry in heaven comes to an end, the door of opportunity to repent closes forever. Therefore, the last plagues will not bring anyone to repentance, but only disclose the hardness of the hearts of those who chose to side with Babylon, prompting them to hate God even more (Rev. 16:9, 11).  Revelation 11:18 summarizes events on earth right before the battle of Armageddon: “The nations were angry”. This state of affairs on earth matches Jesus’ description of the last days (Luke 21:25) and is followed by God’s wrath, which are His judgments in the form of the seven last plagues upon the unrepentant (Rev. 15:1).
Revelation 15 opens with the picture of seven angels with seven bowls filled with this divine wrath. But before this outpouring happens, we have a future glimpse of God’s faithful people (Rev. 15:1-4). They are described as victorious “over the beast, over his image and over his mark and over the number of his name” (Rev. 15:2, NKJV), as they stand on something resembling a sea of glass and sing the song of Moses and the Lamb - all images reminiscent of the Hebrews on the shores of the Red Sea, celebrating God’s victory over the Egyptians (Exodus 15).
These victorious saints are the same ones referred to as the 144,000 in Revelation 14:1-5. Having refused the mark of the beast, they are protected from the seven last plagues. Then, at the Second Advent their mortal bodies are transformed and clothed with immortality (1 Cor. 15:51-54), and they will join the resurrected saints when Jesus comes in power and glory (1 Thess. 4:17).