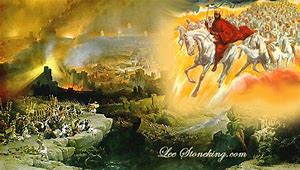 Gathering for the Battle of Armageddon

Read Revelation 16:16. How successful will Satan’s end-time deception be in gathering the people of the world to the battle of Armageddon?
The deceptive demonic miracles will achieve worldwide success. In having spurned Bible teachings, people will believe a lie that will be accompanied by deceptive miracles (2 Thess. 2:9-12). They will unite together in purpose, symbolized by their gathering to a “place”, which is in Hebrew called Armageddon, meaning “the mountain of Megiddo”. Megiddo was not a mountain, but a fortress city located in the Valley of Jezreel (or the Plain of Esdraelon) at the foot of the Mount Carmel ridge. It was an important strategic site.
The Plain of Esdraelon was known for many decisive battles in Israel’s history (see Judg. 5:19; Judg. 6:33; 2 Kings 9:27; 2 Kings 23:29-30). Revelation uses this historical background to depict a final great conflict, called Armageddon, between Christ and the forces of evil. The people of the world are portrayed as a unified army under the leadership of this satanic league.
The “mountain of Megiddo” is an apparent allusion to Mount Carmel that towers above the valley in which the ancient city of Megiddo was located. Mount Carmel was the site of one of the greatest clashes in Israel’s history, between God’s true prophet (Elijah) and the false prophets of Baal (1 Kings 18). This showdown answered the question, “Who is the true God?” The fire that came from heaven demonstrated that the Lord was the only true God and the only one to be worshiped. While the spiritual issue of the battle of Armageddon - Will we obey God or man? - is decided before the plagues fall, those who side with the dragon, the beast, and the false prophet (Rev. 16:13), will then be totally controlled by the devil (as Judas was, leading up to Christ’s crucifixion [Luke 22:3]).
Having chosen the losing side, they will be among those who cry for the mountains to hide them (Rev. 6:16; read also 2 Thess. 1:7-8). Before the plagues fall, however, Revelation 13:13-14 portrays the earth beast bringing fire down from heaven to deceive the world into thinking that Satan’s counterfeit, which will include false revivals led by another spirit, is the work of God.
Armageddon is not a military battle among nations to be fought somewhere in the Middle East, but a global spiritual contest in which Christ decisively confronts the forces of darkness (2 Cor. 10:4). The outcome will be like that at Carmel but on a worldwide scale - with God’s triumph over the forces of darkness.