Why Are Waters Around The World Turning Blood Red? People Fear It Is A Sign Of The End Times 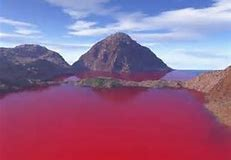 Bodies of water around the globe are reportedly turning blood red which has sparked a number of people to fear that the End Times are near. From seas to rivers, numerous bodies of water seemingly turn to blood overnight. With amazing pictures surfacing online of the incidents, a number of different groups are pointing to a biblical prophecy in Revelation 16:4, which describes an angel pouring a vial over earthly waters that cause them to turn to blood as proof that the apocalypse is near. However, is there another explanation besides impending apocalypse that explains the strange phenomena?


Reports of rivers, rain and bodies of water turning red all over the world have shocked Biblical scholars                                           Rivers in China, Russia, Lebanon, and the Netherlands, as well as bodies of water in the United States, Australia and Sri Lanka, have all turned blood red recently, as reported by reputable news outlets, leaving scientists and experts baffled.  Prophecy Sign:  Waters will be turned blood red
Sometimes we will see an article, and think, "that's interesting", but we will leave it aside and not post it to this blog.  However, when several similar articles start to form a trend, then that catches our attention from a prophetic standpoint.  Such is the case with all these recent articles reporting on bodies of water, along with rain storms, turning blood red.

While there are likely reasonable scientific explanations for most of these stories, some are completely at a loss for explanation.  It's almost as if God is allowing for a brief look into what is about to happen during the coming Tribulation.  The world has been warned, that there will be a judgement meted out by God which will literally turn the waters of the seas as blood.


The second angel poured out his bowl on the sea, and it turned into blood like that of a dead man, and every living thing in the sea died. Revelation 16:3 NIV