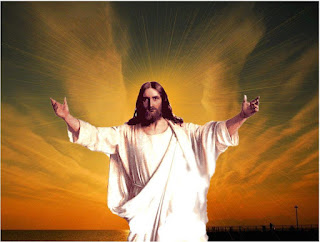 Waves of Earthquakes and Aftershocks Continue to Shake America

Nov 22, 2019 | 0 |
2019 has been free of any killer earthquakes in the US but there have been thousands of smaller ones spreading across the nation.

(OPINION) BIN – Over 200 rabbis, including the Chief Rabbis of Israel, sent a letter to President Trump, thanking him for his recognition of Israel’s right to Judea and Samaria. The letter was composed by the Chief Rabbi of Tzfat, Rabbi Shmuel Eliyahu and published in Srugim compared the political move to the prophecy of Jeremiah. “Over 2,500 years ago, the Prophet Jeremiah claimed that the nation of Israel would return to the hills of Samaria and plant their vineyards there.” The Rabbis then cited another verse in Jeremiah as being manifested by Trump’s actions. “We get to live in the generation where these prophecies are fulfilled word for word. 130 years ago, Jew from all over the world started returning to Israel. 72 years ago, the nation was freed from foreign rule. 52 years ago we returned to Jerusalem, Hebron, and the rest of Judea and Samaria. Our enemies did not accept this, and are still trying to stop the process. But God has promised to Abraham that ‘Your descendants will take possession of the cities of their enemies’, and we have seen with our own eyes how ‘Five of you will chase a hundred, and a hundred of you will chase ten thousand, and your enemies will fall by the sword before you’”. “We are grateful for the blessing of peace, of the hills of Israel producing fruit, and of the Israeli economy gathering strength” the letter read. “We are grateful that the world recognizes Israel’s mission to bring joy and hope to the world, to strengthen justice and bring everlasting peace  21 November 2019


A total of 3 major quakes shake the ring of fire on Wednesday: M 6.1 rocks Laos at its border with Thailand: A mag 6.3 shakes Russia and a mag 6.3 Mexico, struck earlier in the day. 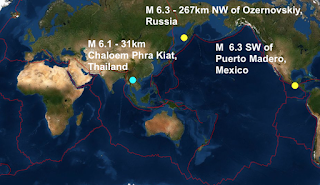 USGS
An earthquake measuring 6.1 in magnitude rocked Laos at its border with Thailand. The earthquake struck close to Muang Nan near northern Thailand by the Laos border on Wednesday night. There have been no reports of damages or casualties, however, reports of Bankok's high-rise towers swayed for 30 seconds. The quake struck at a depth of 10km.

The Suomi-NPP satellite captured this image of the Sheveluch volcano erupting on Nov. 12, 2019, which affected flights over an area spanning from Alaska’s the Aleutian Islands into the North Pacific, according to the NWS Oakland Center Weather Service Unit. Ash from the plume, which was ejected as high as 33,000 feet, was pulled southeastward by winds in the Bering Sea into a strong low-pressure system in the Gulf of Alaska. NOAA

Volcanic Alert Level raised as activity increases on White Island. The volcanic unrest continues at Whakaari/White Island with the Volcanic Alert Level raised to Level 2. New Zealand Herald
BIG ONE! With more than 100,000 small to medium aftershocks in Southern California since July experts are wondering when not if the BIG ONE will come .                  On the 4th of July 2019, Independence day, a magnitude 6.4 quake rocked Surles Valley, in Southern California, two days later a much more powerfull magnitude 7.1 struck the Ridgecrest area just a few miles away from the Surles Valley quake. Since then, more than 100,000 small to medium aftershocks, known as "swarmageddon," have hit the same area, including a mag 5.5, a mag 5.4 and a mag 5.0, which begs the question when not if will Southern California receive THE BIG ONE? http://www.thebigwobble.org/2019/11/waiting-for-big-one-with-more-than.html