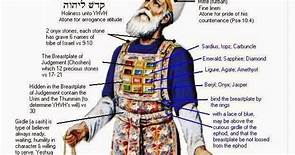 The 12 Tribes of Israel

Jacob & The Tribes of Israel : The triumphs and tragedies of Jacob and his sons in Canaan would lay the foundation for the development of the tribes of Israel. All but one of Jacob's sons were born in Haran. They were foreigners in a foreign land.

Organization of the Twelve Tribes of Israel : The twelve tribes of Israel fled Egypt in haste. They possessed no means of settling disputes, maintaining law and order, or set chain of command. God, however, would use the time in the wilderness to establish an organized and efficient government.
The Tribe of Manasseh: The Tribe of Manasseh was the only of the 12 Tribes of Israel to inherit land on both sides of the Jordan River. This was a result of the double-portion inheritance given to Manasseh, the eldest son of Joseph. The oldest son receiving the double portion was a cultural element in many cultures of the Ancient Near East.
The Tribe of Reuben : The tribe of Reuben descended from the firstborn son of Jacob and Leah, Reuben. As the firstborn son, Reuben played a prominent role in the early accounts. However, his role as a tribe would diminish significantly as a consequence of transgressions.

The Tribe of Simeon : The tribe of Simeon was descended from the second born son of Jacob and Leah, Simeon. This tribe dwelt in relative obscurity, and had very little impact on the history of Israel.

The Tribe of Levi : The tribe of Levi was descended from Levi, the third son of Jacob and Leah. Through an act of faithfulness in the wilderness, this tribe would become set apart by God as His priests.

The Tribe of Gad : Gad was the seventh son of Jacob and Zilpah, Leah's maiden. Gadites were the Marines of the 12 tribes of Israel. They were fierce, athletic, and skillful on the battle field. They played lead roles in the conquest of Sihon and Og, then led the Israelites across the Jordan to Jericho and into Canaan .

The Tribe of Asher : The tribe of Asher proved to be a tribe of contradictions. Influenced by the pagan religion of Phoenicia and chastised by Deborah, the tribe also came to the aid of Gideon, and supplied king David with one-third of his army in Hebron.

The Tribe of Issachar : The tribe of Issachar earned a reputation as a tribe of students of the Law. They were wise men, well respected. Scripture calls them princes. However, the infamous King Baasha of Israel and his son were descended from this tribe.

The Tribe of Zebulun : The tenth son of Jacob, Zebulun would prove faithful throughout much of the Old Testament. The tribe fought bravely with Deborah and Barak. They were mentioned alongside Gideon. The tribe took part in a prophecy of Isaiah's fulfilled by Jesus Christ.

The Tribe of Ephraim (part 1) : Perhaps no tribe symbolizes man's struggle with God more than the tribe of Ephraim. At once rebuked, then praised, Ephraim was always under the watchful eye of God. The name would come to represent the entire northern kingdom of Israel. Ephraim was the royal tribe of the Northern Kingdom, just as Judah was the royal tribe of the Southern Kingdom.

The Ephraimites (part 2) : The Ephraimites participated in many of Israel's engagements throughout the period of the Judges. They played a significant role in both the United and Divided Monarchies.

The Tribes of Israel are the traditional divisions of the ancient Jewish people. Biblical tradition holds that the twleve tribes of Israel are descended from the sons and grandsons of the Jewish forefather Jacob and are called "Israel" from Jacob's name given to him by God.
The twelve tribes are as follows: Reuben, Simeon, Judah, Issachar, Zebulun, Benjamin, Dan, Naphtali, Gad, Asher, Ephraim and Manasseh.
The story of the twelve tribes begins when Jacob and his family went down to Egypt as "70 souls" In Egypt "the Israelites were fertile and prolific; they multiplied and increased very greatly," and there they became the "Israelite

God "remembered His covenant with Abraham, with Isaac, and with Jacob," made Himself known to Moses and rescued the Israelites from Egypt. By this time the nation numbered "600,000 men on foot" which is usually understood to be military-aged men excluding women and children.
At Mount Sinai, the Israelite nation is given its laws and regulations - the Torah - and affirms their covenant with God. After wandering for 40 years in the desert under the leadership of Moses, the twelve tribes enter the land of Canaan with Joshua in command.
After conquering the land, each tribe was allotted an individual territory to settle. During this period of settlement, and the subsequent period of the Judges, there was no predetermined pattern of leadership among the tribes though various crises forced the tribes into cooperative action against enemies.
Shiloh served as a sacral center for all the tribes, housing the Ark of the Covenant under the priestly family of Eli. Under the impact of military pressures, the Israelites felt compelled to turn to Samuel with the request that he establish a monarchy, and Saul was crowned to rule over all the tribes of Israel.
Upon his death, Saul's son was accepted by all the tribes as the new king, save Judah and Simeon who preferred David. David's struggle with the house of Saul ended in victory for him and all the elders turned to David for royal leadership. He ruled from Hebron and later Jerusalem over all the tribes of Israel and following his death was succeeded by his son, Solomon. After the death of Solomon, the tribes once again split along territorial and political lines, with Judah and Benjamin in the south loyal to the Davidic house and the rest of the tribes in the north ruled by a succession of dynasties.